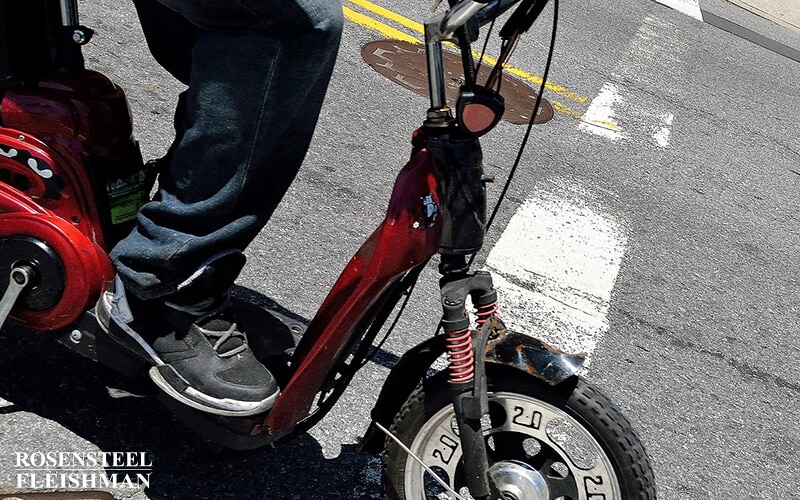 They are expanding into markets all across the country, and if you have been anywhere near Upton Charlotte, then it is likely you have come across someone riding an electric scooter (e-scooter). These fun devices have flooded the streets of Charlotte, courtesy of Lime, Bird, or Spin. Practically anyone with an IPhone or Android can rent an e-scooter by downloading either companies’ respective application onto their smartphone.  Although the prices vary, typically they require $1 (one dollar) to start your ride, and $0.15 (fifteen cents) per minute thereafter. To ride, you must be 18+ years old with a valid driver’s license, although the devices do not require you to show proof upon renting one.

While the people of Charlotte are “riding” this hot new trend, there are growing concerns regarding the risks to public safety. Recent reports have reflected a spike in e-scooter related injuries, including facial contusions, broken arms, broken shoulders, broken wrists, and ankle sprains. Fortunately for Charlotte, there have not been any e-scooter related fatalities reported. As a result of the growing safety concerns, the City Council of Charlotte adopted new rules under the Pilot Program, called the “E-Scooter Share Program.” The program provides guidelines of how and where to operate the e-scooters, and similarly related policies regarding helmet use, speed limit, and other safety requirements. A full text of the rules can be found here: E-Scooter Rules.  Although there are enforceable rules surrounding e-scooters, not everyone abides by them, and even if they did, accidents still happen. It begs the question, what should someone do if they are injured in an e-scooter accident, and how does the law treat accidents and injuries of this nature?

According to an ordinance in Chapter 14 of the Code of the City of Charlotte, an e-scooter is a “device with no more than three twelve-inch or smaller diameter wheels that has handlebars, is designed to be stood upon by the user while riding, and is powered by an electric motor that is capable of propelling the device with or without human propulsion at a speed no greater than 15 miles per hour on a paved level surface.” As such, e-scooters are classified as vehicles under the laws of north carolina.

“every device in, upon, or by which any person or property is or may be transported or drawn upon a highway, excepting devices moved by human power or used exclusively upon fixed rails or tracks; provided, that for the purposes of this Chapter bicycles and electric assisted bicycles shall be deemed vehicles and every rider of a bicycle or an electric assisted bicycle upon a highway shall be subject to the provisions of this Chapter applicable to the driver of a vehicle except those which by their nature can have no application…”

To that end, e-scooter riders should obey all traffic laws, such as riding on the right side of the road, following traffic signals, stop signs, and riding sober. Yes! Riding sober. N.C.G.S. §20-138.1 prohibits operating a vehicle on a street, highway or public vehicular area while under the influence of an impairing substance, or after consuming sufficient alcohol at or above the concentration of 0.08. In the North Carolina case, State v. Crow, the defendant’s dwi (driving while impaired) conviction was upheld for riding an electric scooter while he was impaired. State v. Crow, 623 S.E. 2d 68 (2005).

Beyond that, e-scooter accident and injuries are treated similar to a typical vehicle accident. Safety and medical attention should take priority, followed by an accident report by local law enforcement. A personal injury lawyer should be consulted to help work through fault and liability, which will likely involve applicable insurance companies. It is recommended, however, to speak to an injury attorney prior to the insurance company. An experienced personal injury firm like Rosensteel Fleishman, PLLC, will be able to help discuss the potential compensation options for damage to vehicle, bodily injury, or both.

But perhaps your accident or injury was not a result of the rider’s actions. There have been an increasing number of incidents where the e-scooters malfunction, most commonly, brakes fail and throttles stick. This of course can create very serious safety risks to the rider and other pedestrians and vehicles traveling the roads.

So what legal action does a rider have if their injury comes as a result of a malfunction? Lime, one of the leading e-scooter companies, attempts to circumvent any liability by putting a waiver of liability in their User Agreement & Terms of Service, which a rider must agree to in order to activate their account and begin their ride. Section 7.2 of Lime’s User Agreement & Terms of Service reads, “you hereby waive any and all claims, including those based in contract, tort (including negligence), statutory, and/or other grounds, even if Lime or any of the other released persons has been advised of the possibility of such claims.” Further, section 7.4.2 of the agreement states “you agree that the Products are machines that may malfunction, even if the Products are properly maintained, and that such malfunction may cause injury.”

This may alarm many riders as it attempts to leave them with no means of recourse in the unfortunate event of an injury that results in high medical expenses. However, an experienced personal injury attorney may be able to argue the e-scooter company was grossly negligent. In North Carolina, gross negligence is defined as “wanton conduct done with conscious or reckless disregard for the rights and safety of others.” Yancey v. Lea, 354 N.C. 48 (2001). An act is wanton if the purpose is manifesting a reckless indifference to the rights of others. Id. at 53. The term “wanton” is said to imply a thoughtless disregard of consequences without exerting any effort to avoid it. Cacha v. Montaco, 554 S.E.2d 388. Ultimately, North Carolina courts focus on the person’s knowledge of a dangerous condition and their subsequent disregard for that dangerous condition.

As it relates to e-scooters, riders often “Report an Issue,” through the available e-scooter application, which puts the company on notice of a possible malfunction, or defect of the sort. Thus, if e-scooter companies, like Lime and Bird, have knowledge of a dangerous condition and potential risks involved, then their subsequent actions or inactions could arguably rise to the level of gross negligence, especially in the case of faulty brakes and sticking throttles. E-scooters are known to reach speeds of 15 miles per hour, so the inability to brake or release the throttle poses obvious safety risk to the rider. Despite the user agreements, an experienced attorney could provide a basis to frustrate the enforceability of the agreement.

If you or a loved one was injured by an E-Scooter, please call us at (704) 714-1450.  You will speak directly with a lawyer who can answer your questions and go over your options.  There is no fee for an initial consultation.