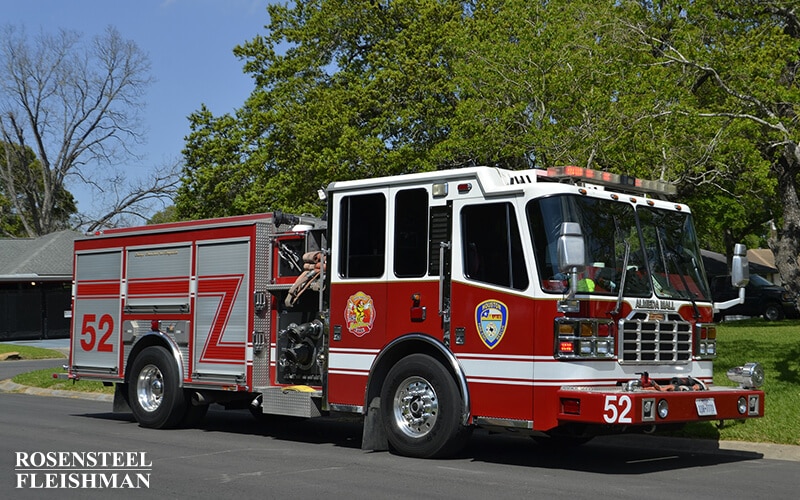 A police officer cannot stop cars whenever he wants because the Fourth Amendment protects us against unreasonable searches and seizures. In order for an officer to conduct a traffic stop under the Fourth Amendment, he must have “reasonable suspicion” that the driver has committed a crime or infraction. But what if the flashing lights and siren that stop you are those of a firetruck, not a police car?

In order to answer this question, we must determine whether the firefighter making the traffic stop is acting as a government agent or a private citizen. Under the Fourth Amendment, we are protected from unreasonable searches and seizures by the government.

The Fourth Amendment states that

The US Supreme Court has held that a “traffic stop is a seizure "even though the purpose of the stop is limited and the resulting detention quite brief."” In order to make a traffic stop, an officer must have “reasonable, articulable suspicion that criminal activity is afoot." However, the Fourth Amendment only protects us from acts of the government, not against the acts of private citizens. The north carolina Supreme Court has stated that

The fourth amendment as applied to the states through the fourteenth amendment protects citizens from unlawful searches and seizures committed by the government or its agents. This protection does not extend to evidence secured by private searches, even if conducted illegally. The party challenging admission of the evidence has the burden to show sufficient government involvement in the private citizen's conduct to warrant fourth amendment scrutiny.

The North Carolina Court of Appeals recently looked at a dwi case where a firefighter made the initial stop of the driver. In State v. Verkerk (2013), a firefighter stopped a car while in his firetruck by turning on its lights and tapping the siren twice. He had seen the car weaving and going well below the speed limit. The firefighter called the police department and reported his location. Then the firefighter spoke with the driver who asked why she had been stopped, and he “explained that he was “concerned because of her driving” and “just wanted to make sure she was okay.”” The firefighter did not hear anything from the police department for a while, so he asked the driver if she would park her car and have someone drive her home. The driver agreed to this plan, but then drove off. Shortly thereafter, police arrived at the scene and the firefighter told them where the driver had gone. She was pursued, stopped, and arrested for DWI.

In conducting its analysis of the issue, the Court of Appeals stated that the issue at question was “whether a state or local government employee who conducts what would otherwise be a search or seizure and who lacks law enforcement authority as a matter of state or local law is acting as a private citizen or as an arm of the State.” The court did not assume that the firefighter’s government employment automatically made him a state actor because “a government employee will be treated like a private citizen for Fourth Amendment search and seizure purposes where the person was acting outside of the scope of the employee's governmental duties and not at the instigation of or in collusion with other government officials or agents.”

To determine the answer to the question of whether the government employee is a state actor, the North Carolina Supreme Court held in State v. Sanders (1990) that we must look at a “totality of the circumstances.” The Court laid out factors to be considered in Sanders, which include “the citizen's motivation for the search or seizure, the degree of governmental involvement, such as advice, encouragement, knowledge about the nature of the citizen's activities, and the legality of the conduct encouraged by the police.”

In a 1981 case, State v. Keadle, the Court of Appeals conducted an analysis using factors similar to those set out in Sanders. In Keadle, a UNC resident hall advisor “found evidence of theft during an inspection of a student's dormitory room.” The Court of Appeals held that “[a]s a resident advisor in a dormitory, he had neither the status nor the authority of a law enforcement officer. It would serve no useful function as a deterrent to illegal governmental searches to apply the exclusionary rule in this instance.”

After reviewing Sanders and Keadle, the Court of Appeals noted that there were a limited number of North Carolina cases addressing this issue. The court then proceeded to look at cases from other jurisdictions which applied factors in a similar manner to Sanders and Keadle and found a Louisiana case with a similar factual scenario to Verkerk (State v. Lavergne 2008). In that case, a firefighter also stopped a driver for DWI with his siren and lights. The Louisiana court

determined that the trial court had not erred by concluding that the firefighter “acted as a private citizen in this case” given that “there is no evidence that [he] acted under the instruction of law enforcement;” that his “possession and utilization of a siren and emergency lights, items customarily used by police, did not automatically convert his actions to government actions;” and that the firefighter “stated that his primary motivation for stopping the defendant was not to assist law enforcement, but to prevent ‘an accident that was going to happen any second.’”

Today, the North Carolina Supreme Court just issued an opinion on the appeal of this case. In its opinion, the Court held that no remand to the trial court was necessary because the defendant never challenged the actions of the arresting police officers. The Court stated that there was no need to “consider the extent of [the firefighter’s] authority to conduct a traffic stop or even whether the encounter with [the firefighter’s] amounted to a “legal stop”” because “sufficient other evidence was presented to establish that the ... police had reasonable suspicion to stop defendant based upon [the firefighter’s] observations of defendant’s driving that he transmitted to the … police before activating the lights and siren.”

If you have been arrested for DWI, visit www.rflaw.net to get legal help.