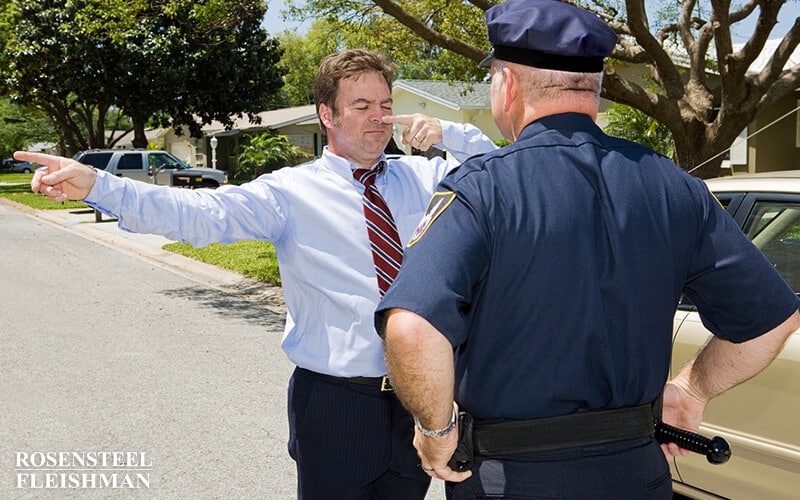 be based on specific and articulable facts, as well as the rational inferences from those facts, as viewed through the eyes of a reasonable, cautious officer, guided by [the officer’s] experience and training. The only requirement is a minimal level of objective justification, something more than an ‘unparticularized suspicion or hunch.’

However, the north carolina Supreme Court has also held that “a seizure does not occur simply because a police officer approaches an individual and asks a few questions” and “[n]o one is protected by the Constitution against the mere approach of police officers in a public place.” In that case, the encounter between the officer and the individual would be deemed voluntary.

This issue recently came up in the North Carolina Court of Appeals case, State v. Veal, the ruling in which was issued Tuesday. In Veal, a gas station employee called in a report that of an intoxicated male was attempting to leave the gas station in a green Chevy truck. The man was identified as being an elderly white man in a white hat. The officer who responded to the call arrived at the gas station and parked his car. When he saw the defendant in the green truck, he approached on foot and asked to speak with the defendant. During their conversation, he observed an odor of alcohol coming from the defendant, an unopened can of beer in the truck, and slurred speech from the defendant. Following these observations, he asked the defendant to get out of the truck and perform various field sobriety tests. Based on the defendant’s performance on these tests, the officer arrested the defendant for dwi.

The defendant “filed a motion to suppress all evidence obtained from the alleged illegal seizure, arguing that [the officer] lacked reasonable articulable suspicion of criminal wrongdoing.” The  trial court denied the defendant’s motion.

On appeal, the Court of Appeals reviewed North Carolina case law dealing with voluntary encounters, noting that the North Carolina Supreme Court has held “that neither reasonable suspicion nor probable cause were required for an agent to approach the defendant and engage in conversation.” Because there was no evidence that the officer “used any physical force when approaching defendant” or “used “any “psychological barriers” while initiating contact with defendant” (such as activating his lights, removing his gun, or using a threatening tone), the officer “engaged in a voluntary encounter with defendant.”

The officer’s observations during the voluntary encounter then provided reasonable suspicion to detain the defendant. The investigatory stop was initiated when the officer “asked defendant to step out of his vehicle to further investigate.” The officer’s “observations of the odor of alcohol and an unopened container of beer made during the voluntary encounter are a sufficient basis for reasonable suspicion to support the stop.”

The Court of Appeals then addressed the defendant’s argument that the stop was based on an anonymous tip. The court reviewed various cases dealing with anonymous tips and stated that the North Carolina Supreme Court has held that “[a]n anonymous tip can provide reasonable suspicion as long as it exhibits sufficient indicia of reliability.” Because the gas station employee gave information identifying him and “information based off his personal observations of defendant’s behavior inside the store,” “the tip in this case would be a more reliable tip than a true anonymous caller case where the caller gives no identifying information.”

Furthermore, the officer “was able to corroborate the caller’s information before initiating a stop.” In fact, it was the officer’s personal observations of the odor of alcohol and the unopened can of beer in the truck that provided the reasonable suspicion to justify the investigatory stop.

Interestingly, in its discussion of anonymous tips, the Court of Appeals did not mention the recent U.S. Supreme Court case, Navarette v. California, decided earlier this year. In Navarette, the Court held that a reliable anonymous tip of specific behavior indicative of impaired driving provided reasonable suspicion to justify a traffic stop. Would a review of Navarette have made a difference to the Court of Appeals discussion? Because the court deemed the initial encounter voluntary, it seems that the basis of the tip doesn’t matter. But what if the initial encounter was not deemed voluntary and was instead a seizure?

It’s not completely clear from the facts in the Court of Appeals opinion. The Supreme Court in Navarette required some specific behavior and identifying information to deem the anonymous tip reliable. In Navarette, the anonymous tip reported that a truck had run her off the road and gave information regarding the truck’s location, description and license plate number. However, the Court stated that a 911 call reporting a “conclusory allegation of drunk or reckless driving” would not provide reasonable suspicion to justify a traffic stop. The Court of Appeals opinion describes a “report of an intoxicated person” and a “report of an impaired driver.” These reports would be “conclusory allegations.” In his witness statement, however, the employee who called in the tip stated that the defendant was stumbling and made a mess of the hot water while trying to make his soup. These observations would be specific behaviors indicating impairment and might provide reasonable suspicion to justify an investigatory stop.