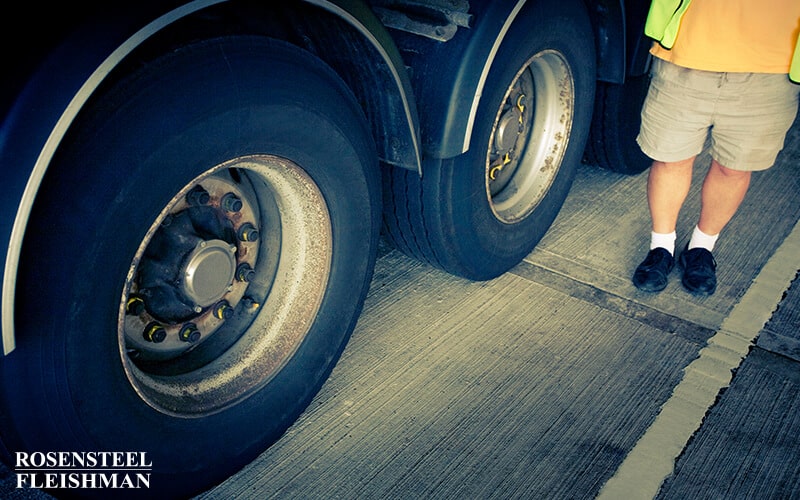 I. A Truck Overweight

Truck driving is one of the largest hazards that the average driver faces every single day on the roads of North Carolina. During the year, the federal DOT estimates there will be over 325,000 truck-involved accidents across the country. What’s much less known is the fact that many of these truck accidents also present legal risks. Many truckers (certainly, not all, or even most) are a legal challenge because they may not have the financial ability to cover the enormous damage they often incur, even in what seems at first to be a simple wreck. This mismatch between car versus truck often requires more than simple legal assistance. Expert help from a truly experienced truck accident lawyer is essential in trying to balance the scales in these accidents.

One of the most common risks is when large companies try to avoid paying for the negligent actions of truckers. One way this detour from liability can happen is through tenuous claims that the work is being done by truckers who work as “independent contractors.”

II.  King of the Sand Hill?

It was a November day, and Rhonda G. was driving near Pittsboro, in Chatham County. At the same time, a trucker was working with delivering a second load of transporting sand. Unknown to Rhonda, the truck was also overloaded. At trial, the truck accident lawyer proved that the 23.71 tons of sand were 2 tons more than the truck was legally authorized to haul. In losing control of the vehicle, the trucker slammed into the back of Ruth’s car. In presenting a claim for her severe physical injuries and damages, Ruth’s husband also joined the suit in claiming loss of consortium with his wife.

A person finding themselves in Rhonda G.’s position would make some reasonable – but as it turns out, incorrect—assumptions. Looking to identify conduct of the company employing the trucker makes good sense. After all, one reasonable assumptions is often that a company involved in selling sand probably has a method of delivering that sand. In this case, the company sought to prove it had no control or legal responsibility for the operation of the dump truck.

The defense for these companies insisted that they had no employment or agency relationship at all with the trucker. The truck accident lawyer diligently pursued every connection, which tied these actors together in business: G. S. Materials (who owned the sandpit); Aggregate Carriers, Inc. (the company that manages the transportation orders), and the trucker himself.

As it turns out, the appeals court wrestled with who effectively ‘controlled’ the operation of Danny Garner Trucking. Did Danny Garner basically follow orders, and act under the control of the other, larger operators? There was no dispute that Danny Garner owned the truck or the company that ran the dump truck outright. He had started the business in 1990, and had a commercial license in his own name. On the other hand, the truck accident lawyer pointed out that Garner also seemed to act as an agent for GS Materials. GS Materials paid him a set amount, which was not negotiable. GS Materials provided the work, and the instructions for delivery. Aggregate Carriers, the dispatcher operating in association with GS Materials, also had sole discretion as to whether not to fire Garner or end his services. For the appeals court, the determining factor seems to have been that Garner had discretion about whether or not he would actually carry the sand, how much sand he would carry, and when he would “quit work” for the day.

The truck accident lawyer introduced evidence that Garner was very restricted in his actual freedom of choices about how to perform the work. As good as these arguments were by the truck accident lawyer, the court said Garner was an independent contractor, and doesn’t pass his liability for the wreck on to the hiring company. The court felt Garner was exercising his own judgment and methods, “without being subject to” an employer. Clearly, that was a pretty close call.

(1) is it an independent business or occupation? (2) does he use independent skill or knowledge and doing his work (3) is he doing a specified piece of work in a fixed price? (4) Can he be fired because he does the work one way or another? (5) is he otherwise in the regular employee of the other contracting person? (6) is he free to use other people’s help (assistants) as he thinks best? (7) does he have control over his own assistants and (8) does he pick his own time.

The court really zeroed in on only two of the eight factors. First, that Garner actually advertised his business on his own dump truck, and had done so since 1990. Next, that Garner was viewed by the court as having “special skill and independent use” of those skills. Less persuasively, the appeals court said that neither GS Materials nor Aggregate Carriers had never instructed Garner on how to operate his dump truck. If there had been evidence (and there wasn’t) of Garner being told to overload his truck[1], there might have been a different result.

IV. Passing On The Right...

Besides these agency or “control of the employer” arguments, the truck accident lawyer made every effort to look deeply into north carolina trucking laws, too. The argument by the truck accident lawyer in that instant was that the operation of Aggregate Carriers was that they were acting as a “public utility” or a common carrier. However, it appears that North Carolina statutes excluded transportation of sand from this statutory ‘public carrier’ coverage.

It can happen that some federal issues can sometimes be used in a state court proceeding. Because Garner was running a dump truck, it was also just possible that federal rules regulating commercial dump trucks might apply. Without going into those details right now, the key issue in excluding any federal liability here was that there was no proof that Garner was in any way engaged with interstate commerce, at least according to North Carolina court interpretations.

The truck accident lawyer was certainly on solid ground, in pointing out that Garner had no other hauling contract besides GS Materials and Aggregate Carriers. Not every good argument, however, wins in a court of law. At times, it can be a frustratingly slow process to fix a problem this large. Here, though there are no adequate state laws addressing this specific case, there is continuing agitation to address the risks of letting independent contractors become a legal shield for possible negligence. Getting your case to a qualified truck accident lawyer helps in the search for better solutions, more meaningful negotiations, and to protect your present rights. If you, a family member or a loved one have been hurt in any truck or truck-related accident—or have questions involving information regarding your rights or claims for insurance or recovery in that accident, please contact us.  You will speak with an experienced truck accident lawyer… a trial/truck accident lawyer who can best answer your questions about how your case of injury or loss should proceed.  There is never a fee for this initial consultation.

[1] It’s fair to criticize the court decision on this basis, too: they seemed to weigh in against the adequacy of proof that the overloading was a factor in causing the accident, anyway. That conclusion seems extraneous to the threshold control issue, and suggests a certain disinclination, without more clear laws from the legislature on the point, to support independent contractor status.