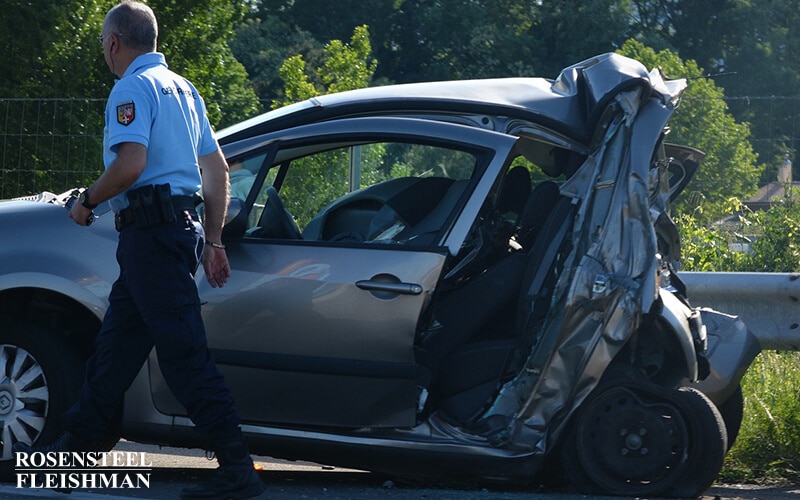 Last Friday, the North Carolina Supreme Court issued an opinion in the case Lunsford v. Mills, in which it held that a party injured in a car accident where there is more than one at-fault driver is not required to exhaust liability policies of all of the at-fault drivers before collecting under his uninsured motorist (UIM) policy. Instead, the injured party must only exhaust the liability insurance of one of the at-fault drivers to trigger the UIM benefits.

In Lunsford, one of the defendants was driving a tractor-trailer on I-40 when he rounded a curve and lost control. The tractor-trailer hit the median barrier and flipped. The plaintiff was a volunteer firefighter and the first responder on the scene. Because the truck driver defendant was injured and the truck was leaking diesel, the plaintiff tried to lift the truck driver defendant over the median barrier so that he could assess his injuries in safety. At this time, a second defendant was driving on I-40. The car in front of the second defendant slowed because of the accident, and the second defendant swerved to avoid hitting the car in front of him. When he swerved, he struck the plaintiff, who was dragged underneath the car and sustained serious injuries.

The trial court sided with the plaintiff, and the plaintiff’s insurance company appealed to the court of appeals. On appeal, the plaintiff’s insurance company argued that it “was not required to provide coverage until all applicable policies—meaning all policies held by all the named Defendants—had been exhausted.” The court examined the UIM statute G.S. 20-279.21(b)(4) which states that “Underinsured motorist coverage is deemed to apply when, by reason of payment of judgment or settlement, all liability bonds or insurance policies providing coverage for bodily injury caused by the ownership, maintenance, or use of the underinsured highway vehicle have been exhausted.” The court reasoned that the language in the statute meant “UIM coverage is triggered the moment that an insured has recovered under all policies applicable to ‘a’—meaning one—‘underinsured highway vehicle’ involved in a motor vehicle accident resulting in injury to the insured.”

Although the court noted that this was an issue of first impression in north carolina, it “believed that its interpretation of the UIM statute was consistent with that court’s precedent suggesting that ‘insureds should [not] be kept hanging in limbo as they are forced to sue any and all possible persons . . . before they could recover UIM benefits just because other potential tortfeasors also happen to be covered under automobile policies.’” Therefore, the court reasoned that insurance companies providing UIM coverage must “first provide coverage, and later seek an offset through reimbursement or exercise of subrogation rights.”

The North Carolina Supreme Court began its analysis by examining the relevant statutory provisions. First, G.S. 20-279.21(b)(4) defines an “uninsured highway vehicle” as

a highway vehicle with respect to the ownership, maintenance, or use of which, the sum of the limits of liability under all bodily injury liability bonds and insurance policies applicable at the time of the accident is less than the applicable limits of underinsured motorist coverage for the vehicle involved in the accident and insured under the owner’s policy.

The statute goes on to provide that

Underinsured motorist coverage is deemed to apply when, by reason of payment of judgment or settlement, all liability bonds or insurance policies providing coverage for bodily injury caused by the ownership, maintenance, or use of the underinsured highway vehicle have been exhausted.

The plaintiff’s insurance company interpreted the statute to require that the injured party’s UIM coverage limits must be compared to the total of all the liability limits of each at-fault driver.

The Court disagreed, reasoning that

As an initial matter, the reference to “all bodily injury liability bonds and insurance policies applicable at the time of the accident” is found in the UIM statute’s definition of an “underinsured highway vehicle,” not in the triggering provision. The location of the clause in a separate and distinct provision of the UIM statute indicates that the clause relates solely to an underinsured highway vehicle and not, as [the plaintiff’s insurance company] suggests, to all the vehicles involved in an accident.

Furthermore, “[t]he plain language of the triggering provision identifies the liability bonds and insurance policies relevant to determining whether UIM coverage is triggered as those bonds and policies relating to “the ownership, maintenance, or use of the underinsured highway vehicle” and “[a] statute’s use of the definite article—’the’—indicates that the legislature intended the term modified to have a singular referent.”

The Court also examined the purpose of the statute which was “to address circumstances where ‘the tortfeasor has insurance, but his [or her] coverage is in an amount insufficient to compensate the injured party for his [or her] full damages.’” In previous cases, the Court has recognized that “the statute should be ‘liberally construed’ in order to accomplish its purpose of “protect[ing] . . . innocent victims who may be injured by financially irresponsible motorists.” Therefore, the statute “should be ‘interpreted to provide the innocent victim with the fullest possible protection.’”

Finally, the Court reasoned that North Carolina statute provides for subrogation procedures and these procedures would be unnecessary under the plaintiff’s insurance company’s interpretation. If “insureds were required to exhaust the liability policies of all at-fault motorists as a prerequisite to recovering UIM coverage, there would be no need to provide UIM carriers subrogation or reimbursement rights, and consequently, these provisions would be rendered meaningless.”

Therefore, the Court concluded that “UIM coverage is triggered upon the exhaustion of the policy limits of a single at-fault motorist.”