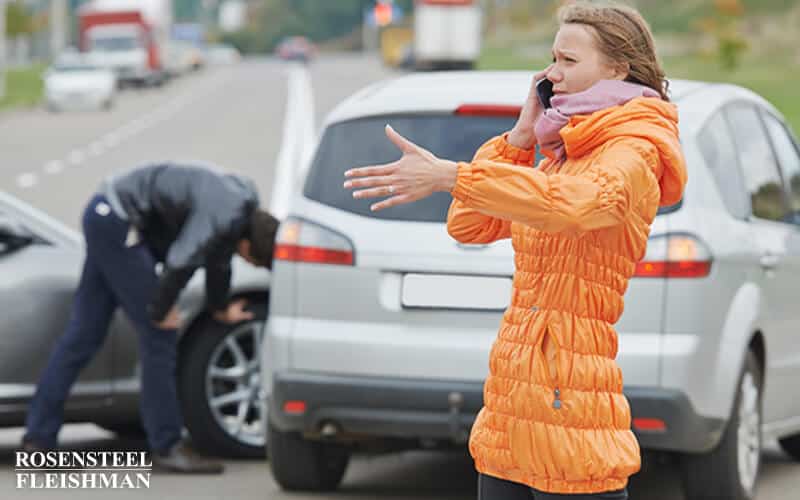 The North Carolina Supreme Court has held that this exemption does not apply only to police vehicles involved in a chase but also to police vehicles responding to a distress call from another officer. In the 2005 case, Jones v. City of Durham, an officer responding to a distress call from another officer travelled at a speed between 45 and 60 miles per hour, in a 35 mph zone, through a residential area. Shortly after 9:00 a.m., a pedestrian was crossing a street in the area. Although she heard the police vehicle’s siren, she could not tell which direction it was coming from. She saw the police vehicle coming towards her while she was in the middle of the street and turned back to return to where she had come from. The police officer anticipated that she would continue crossing the street and swerved to avoid her, but instead hit the pedestrian, causing her severe injuries.

The Court went on to hold that “the standard of negligence by which a law enforcement officer must be judged when acting within N.C.G.S. § 20-145 is that of "gross negligence" as to the speed and operation of his vehicle,” which it equated to situations “where the responder recklessly disregards the safety of others.”

To determine whether the law enforcement officer has acted with gross negligence under G.S. 20-145, the Court stated that we must looked at three factors:

Applying the first factor to the facts of the case, the Court recognized that they had previously “held a law enforcement officer was not grossly negligent for pursuing a suspect who violated a mere safety infraction.” Therefore, the Court held, the police officer’s response to another officer’s “two distress calls in a possible life or death situation was a justifiable event of increased speed.”

In analyzing the second factor, the Court noted that the officer “drove his vehicle at a speed of 45 to 60 miles per hour on a cool, clear, and dry morning, with his siren activated, for a distance of two and one-half miles in light traffic through a residential area.” The Court reviewed several other North Carolina cases and determined that “[t]hese circumstances surrounding the timing and location of [the officer’s] event of increased speed were considerably less dangerous to others than those found in [those] cases.”

Lastly, the Court looked at the officer’s specific conduct and noted that the relevant conduct was the officer’s driving speed and his evasive maneuver in attempting to avoid the plaintiff. The Court determined that “[t]raveling 10 to 25 miles per hour over the speed limit by a law enforcement officer in an emergency situation is not conduct which supports a finding of gross negligence” because North Carolina courts have previously found this speed differential, as well as those far greater, not to be indicative of gross negligence. With regard to the officer’s evasive maneuver, the Court held that the plaintiff failed to forecast “evidence of ‘conduct done with conscious or reckless disregard for the rights and safety of others’ regarding [the officer’s] decision to perform such a maneuver, rather than attempting to stop, upon seeing plaintiff on the double yellow line two-thirds of the way across” the street. In fact, the law enforcement training manual stated that one way to avoid a collision was to perform such a maneuver.

Therefore, the Court held that the defendant was properly granted summary judgment because the plaintiff failed to forecast evidence which presented a genuine issue of material fact regarding the officer’s gross negligence.

Since Jones, the court of appeals has expanded on the North Carolina Supreme Court’s analysis. In Greene v. City of Greenville (2013), the court of appeals stated that under the Court’s first prong, relevant considerations “include whether the officer ‘was attempting to apprehend someone suspected of violating the law’ and whether the suspect could be apprehended by means other than high speed chase.” Under the second prong, a court should “look to the (1) time and location of the pursuit, (2) the population of the area, (3) the terrain for the chase, (4) traffic conditions, (5) the speed limit, (6) weather conditions, and (7) the length and duration of the pursuit.” Finally, under the third prong, “[r]elevant factors include (1) whether an officer made use of the lights or siren, (2) whether the pursuit resulted in a collision, (3) whether an officer maintained control of the cruiser, (4) whether an officer followed department policies for pursuits, and (5) the speed of the pursuit.”

Finally, it is important to note that in Greene, the court of appeals stated that “North Carolina's standard of gross negligence, with regard to police pursuits, is very high and rarely met” and, “we can find no case where this Court or our Supreme Court has found that gross negligence existed.”