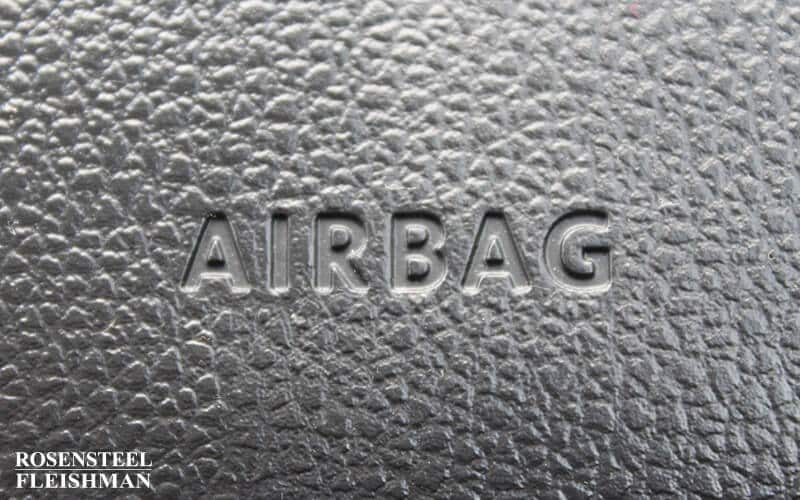 How To Bring an Airbag Injury Claim

Today, it seems impossible to buy a new car without airbags. Most vehicles have at least two to four, and some even more, airbags installed. Most vehicles contain airbags on the driver’s side, passenger’s side, second-row sides, knee airbags, and rear airbags. Airbags are designed to save lives, but oftentimes they pose a significant danger and cause more injury due to the amount of force upon discharge. Despite deficiencies, almost every car has an airbag system.

The idea of airbags first appeared in the Second World War. Since then, they were developed and promoted by various engineers, and eventually, installed in nearly every vehicle starting in the 1970s. The general purpose behind airbags is that in the event of an accident, the vehicle’s sensors send signals to the central unit (computer), which processes them, and if they estimate that there is a need for activation, they send the signal to the airbag to deploy. In the past, only one sensor was used, however today, there are a number of sensors surrounding the vehicle accelerometers, impact sensors, door pressure sensors, passenger sensors, passenger weight sensors, and rollover sensors. The computer software used in the vehicle also contains other sensors that monitor the speed of the vehicle and, depending on age, type, model, and equipment, it receives data from systems such as ABS and ESP (Electronic Stability Control) and other advanced security systems.

The underlying technology of an airbag system is fairly simple.  Airbags are essentially a small explosion. A mixture several substances are electrically activated, and during combustion it releases gas nitrogen, which inflates the cushion within only 20-30 milliseconds. The airbag itself is made of synthetic composite canvas, with ventilation openings for gas discharge, that produces a depreciation effect when it is in contact with the passenger. Without these openings, passengers would experience direct impact comparable to hitting their heads against a wall.

Recently, the National Highway Traffic Safety Administration (NHTSA) has advised over 19 different car makers to replace their frontal airbags—one of the largest and most complex safety recalls in U.S. history. Takata airbags, a major supplier from 2002 to 2015, has equipped over 41.6 million vehicles with 56 million defective air bags. The NHTSA has warned vehicles owners that Takata airbags could explode when deployed because of the long-term exposure to high heat and humidity. The deployment of these airbags have caused severe injuries and even death to car occupants.  Tens of millions of vehicles with Takata air bags are under recall.

Reports have indicated that the true danger lies in the airbag’s inflator, a metal cartridge loaded with propellant wafers, which in some cases has ignited with explosive force. If the inflator housing ruptures in a crash, metal shards from the airbag can be sprayed throughout the passenger cabin—a potentially disastrous outcome from a supposedly life-saving device.

There are numerous conditions that can cause the airbag to inflate improperly and most of them are associated with airbags that use ammonium nitrate-based propellant without any accompanying chemical drying agent. As a result, long term exposure to high heat, humidity, environmental moisture, and age can cause these air bags to explode when deployed.

Historically, north carolina hesitated to bring any effect to its tort laws. However, the North Carolina Court of Appeals changed that tradition in 1989 by recognizing a negligence theory called the “enhanced injuries” doctrine. Under this doctrine, a manufacturer owes a duty to its purchasers to design and build a vehicle which is reasonably safe in order to minimize its injury-producing effects. As such, recovery may be allowed under this doctrine when defects in a vehicle, resulting from some negligence of the manufacturer in the vehicle’s design or construction, enhance or increase the Plaintiff’s injuries in an accident, although the defect did not cause the accident.

For example, the court in Warren v. Colombo, addressed the issue and held that a manufacturer could be liable for enhanced injuries caused by the negligent design and manufacture of a product. The Warren case involved a tractor-trailer truck that crossed the center lane of a highway and struck into the side of a school bus, killing six children, the bus driver, and wounding several others. The administrator of the estate of Robert Warren, one of the children killed, brought a claim alleging that negligent bus design and manufacture caused more severe injuries to the plaintiff than he would have suffered if the bus had been properly designed. The Trial Court dismissed the claim for failure to state a claim upon which relief may be granted, but the North Carolina Court of Appeals agreed with the plaintiff that a cause of action for enhanced injuries is permissible under North Carolina law, and reversed the trial court’s dismissal of a claim. The court held that a manufacturer may be liable for injuries caused by a negligently designed product that is unsafe for its intended use. The court pointed out that the manufacturer is not under a duty to produce a crash-proof vehicle, but it is required to design and manufacture a reasonably safe product that will minimize injury in the event of impact.

In addition, in 1968 landmark case Larsen v. General Motors Corp., the United States Court of Appeals for the Eighth Circuit adopted a broader view that allowed a plaintiff to recover for enhanced injuries caused by a negligently defective design. The court in Larsen held that

“where the manufacturer's negligence in design causes an unreasonable risk to be imposed upon the user of its products, the manufacturer should be liable for the injury caused by its failure to exercise reasonable care in the design.... No rational basis exists for limiting recovery to situations where the defect in design or manufacture was the causative factor of the accident, as the accident and the resulting injury, . . . all are foreseeable. . . at least, the unreasonable risk should be eliminated and reasonable steps in design taken to minimize the injury-producing effect of impacts.”

Enhanced-injury cases require the plaintiff to prove the same basic elements involved in other product liability cases. The essential elements of a product liability action asserted under negligence theory are: (1) a duty owed by the defendant to the plaintiff; (2) a breach of that duty; (3) injury directly or proximately caused by that breach; and (4) damage resulting from that injury.

Enhanced injury is a recognized claim in North Carolina, and can be useful in personal injury claims related to defective airbag injuries. Because North Carolina is a contributory negligence state, a person may be prevented from bringing a claim. If you or a loved one was injured by an airbag please contact us.  You will speak directly with a personal injury lawyer who can best go over your options and rights.  There is no fee for the initial consultation.