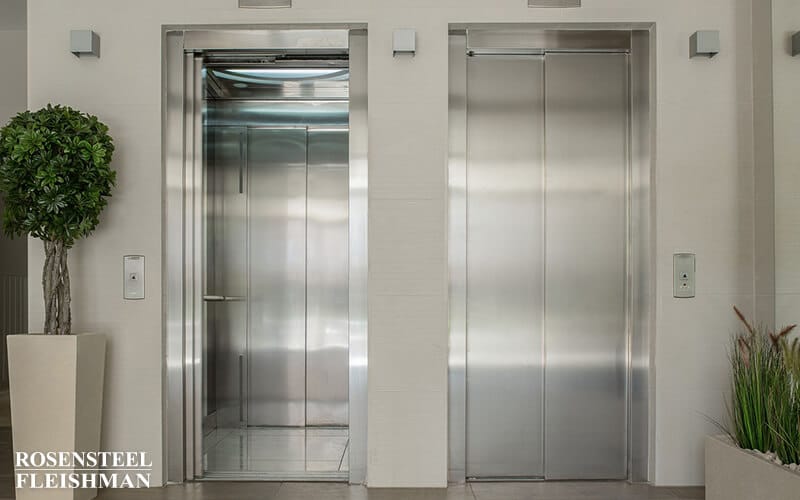 I. A Door Left Open

At some point, we all think about it once the doors of an elevator close behind us: what are the chances of this elevator actually falling? Then, being human, we reach our destination and promptly stop thinking about that horrible possibility. Scientists who study fear and neurobiology have observed that in the average human being, the only fear we are born with appears to be a fear of falling. As our brain’s amygdala develops, so does our personal capacity for experiencing all sorts of fears.

Unfortunately, it’s also true that after an accident, we might experience so many fears that we may become paralyzed from getting the help we need. An experienced accident attorney also knows fear can be such a determining factor that memory of the accident itself is often lost.

The facts of the fall couldn’t have been much more frightful. It was a series of unfortunate coincidences, all culminated when a pregnant, 24-year-old woman (Mrs. McIntyre) fell down an elevator shaft in a building in Greensboro. The elevator cage itself had been raised above the hallway’s elevator doors, so that workmen could reach the wiring apparatus that was being replaced. One of the odd twists, yet not too uncommon in these cases, is that the woman had absolutely no memory whatsoever of the fall or the moments before the fall. There should have been no doubt, logic says, of the fact that she fell. She was found lying unconscious at the bottom of the shaft and had to be carried out. The only good thing to be said was that she was injured in a clinic facility, and received fairly prompt medical attention.

Experienced accident attorneys know that logic doesn’t always dictate law. In this case, her inability to recall what happened raised legal issues about the sufficiency of her evidence. Since she couldn’t testify to what happened, and there were no eyewitnesses, the trial court dismissed her case for lack of evidence.

The old saying asks, “if a tree falls in the forest, and no one is there to hear it, does it still make a noise?” That no one – including Mrs. McIntyre herself – could testify that she had absolutely fallen in such a way as to roll through the gap in the doors, and then down into the elevator well raises an interesting legal question. At the same time, the law has regarded these things as sometimes speaking for themselves.  The woman testified positively under deposition that she had “blacked out shortly after receiving medical treatment” and as she was walking down the hall towards the elevator.

Perhaps, and giving it some benefit of the doubt, the trial court found that the size of the opening simply couldn’t permit a person to have fallen through it in the way Mrs. McIntyre described. But as we will talk about in a few minutes (via a look at the dissent in this case), there seems to be a desire by some to protect certain industries or business interests instead of accident victims. Talking with an accident attorney soon after an accident helps even the legal playing field.

The elevator company presented evidence that the gap, or aperture, between the parts of the cage and of the open elevator shaft was only about 18 inches wide. This small size itself, the trial court implied, was hardly enough for someone to fall through. Even if someone could have fallen through that space, the elevator company insisted, it should not be regarded as “reasonably foreseeable that an adult person” would or even could fall through. If it wasn’t foreseeable, then there was no duty or breach of duty to Mrs. McIntyre.

After measuring both arguments, the Supreme Court agreed with the accident attorney and relied on the evidence of the specific dimensions provided. It was, they determined, “evidently” large enough for Mrs. McIntyre to have fallen through.  Even more crucially, the accident attorney had discovered that the elevator company’s own workmen had themselves, only a few minutes before the woman’s accident, passed through exactly that same small opening. In observing that Mrs. McIntyre certainly appeared to have fallen through the small space, the north carolina Supreme Court waxed poetic in quoting from Romeo and Juliet, Act III: “like Mercutio’s wound, it is not so deep as a well, nor so wide as a church door; but it is enough.”

IV. “We shouldn’t describe the size of the warning flag.”

The accident attorney had won the appeal and created a helpful warning flag to other companies in the process. It’s worth noting, however, that there was a dissenting opinion. The dissenting judge disagreed with allowing the reinstatement of Mrs. McIntyre’s lawsuit. The judge criticized the majority for allowing the injured woman to complain about what he described as “professional” diligence in the elevator’s repair.  Put another way, the dissenting judge was arguing that necessary repairs not only keep people safe, but if they’re done in a professional way, should also provide some immunity from these types of negligence suits.

The dissenting judge specifically tried to limit court review where negligence would rely on increased oversight of companies: “ (b)ut it is not the province of the court to prescribe the type of warning which should’ve been provided. We do not prescribe the size of the danger flag… We merely determine whether the method of warning adopted by defendant evidences want of due care… The court below answered in the negative.” Beyond that, the dissenting judge also seemed skeptical of the plaintiff herself. He regarded her having “blacked out” with some suspicion; he noted that she walked “some distance to the back of the hall where the elevator was located,” and then the judge went on to say that she “in some unexplained manner fell in the elevator shaft.”

Certainly, some members of the legal profession are not short on being suspicious of injury victims. Yet, it’s also a biased point of view that a talented accident attorney anticipates and knows how to deal with in a strong, evidentiary way. It’s worth noting that the dissenting opinion dealt not at all with the measurements of the elevator, and the repairmen’s conduct in entering and exiting that very space, which the negligence attorney had provided. As previously noted, a negligence attorney can also make juries and judges aware of the possibility that it’s not uncommon for trauma or injury victims to lose the memory not only of the event, but immediately before the accident itself[1].

It’s very possible the dismissal before a chance at a jury trial was a major problem in the mind of the Supreme Court judges. Generally, most judges and courts don’t like to flatly deny someone their legitimate day in court as long as there’s some evidence. Rather than hearing any arguments on either side, including issues of possible contributory negligence by Mrs. McIntyre, or even if the medical center itself was somehow to blame… the trial judge had simply dismissed the case entirely (in what’s called a nonsuit).  The majority on the Supreme Court emphasized that many of these issues are best left to a jury. Additionally, the Supreme Court ordered the trial court to allow the medical facility itself to be named in the refiled suit.

Most importantly: the baby was unharmed in the fall and went to full term, arriving safely at her desired destination several months after the accident.

While the dissenting judge clearly agreed with the trial court dismissal, experienced accident attorneys know how important it is to protect the basic right to prove negligence to a jury. This case showed how difficult that can be, when the medical injuries impair what may be the best witness’s evidence. It demonstrated how an experienced accident attorney can nevertheless diligently research and discover crucial facts. If you, a family member or a loved one have been hurt in any accident, including a fall or other incident—or have questions involving information regarding your rights or claims for insurance or recovery in that accident, please contact us.  You will speak with an experienced accident attorney… an accident attorney who can best answer your questions about how your case of injury or loss should proceed.  There is never a fee for this initial consultation.