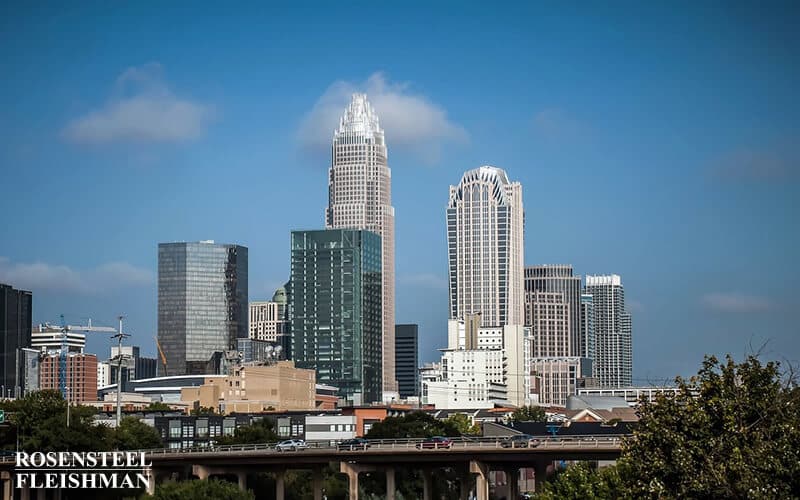 Injured on a Construction site?

In Charlotte’s Southend and Uptown neighborhoods, there are at least 16 different construction projects underway. At nearly every block, you are likely to see cranes swinging, excavators, bulldozers, and dozens of other heavy construction equipment. You will also see the many brave construction workers buzzing around in their hard hats working tirelessly to transform our amazing city.  The market has demanded more housing, office space, and the development of the latest high rises. As a result, there is likely to be even more construction projects and construction workers engineering our fast-growing metropolis in the years to come.

Although it is exciting to see these large-scale, often commercial, developments in our city, some of the most dangerous working conditions of any industry are in construction. This high hazard industry exposes workers to a variety of risks, such as falling from rooftops, unguarded machinery, being struck by heavy equipment, electrocutions, silica dust and asbestos. According to the Bureau of Labor Statistics, thirty-six (36) construction-related fatalities in north carolina were reported in 2017. These fatalities were reportedly related to falls, slips, and trips, exposure to harmful substances, contact with objects and equipment, and transportation incidents. Consistent with the Bureau of Labor Statistic reports, the federal Occupational Safety and Health Administration (OSHA), reported the main cause of death in the construction industry were falls, getting hit by an object, electrocution, and getting caught in machines. Other dangerous activities involved scaffolding, excavations, and trenching (according to the nationwide report of the Bureau of Labor Statistics, excavation and trench-related fatalities in 2016 were nearly double the average of the previous five years).

The federal Occupational Safety and Health Administration (OSHA) provides specific regulations and standards that must be followed by the construction industry. These standards and regulations are enforceable guidelines that employers must implement to protect the employees from physical harm. For example, under the OSHA Act of 1970, an Act administered by OSHA to govern the federal law of occupational health and safety in the private sector and federal government, each employer “shall furnish to each of his employee’s employment a place of employment which is free from recognized hazards that are causing or are likely to cause death or serious physical harm to his employees.” 29 U.S.C. § 654. Compliance with OSHA standards may require employers to adopt certain practices, means, methods, or processes reasonably necessary and appropriate to protect workers on the job. Any construction company employee can contact an OSHA area director to inspect his or her workplace if he or she believes the workplace has hazardous conditions or is in violation of OSHA standards.

If an injury comes as a result of an accident, pursuant to the North Carolina Workers’ Compensation Act, then damages would fall within the Act’s exclusive coverage. “Accident” under the North Carolina Workers’ Compensation Act, means (1) an unlooked for and untoward event which is not expected or designed by the injured employee; (2) a result produced by a fortuitous cause. Harding v. Thomas & Howard Co., 124 S.E.2d 109, 110-11 (1962).

On the other hand, if injuries resulted from an intentional tort committed by the employer, then the employer’s intentional tort will support a civil action for personal injuries. Woodson v. Rowland, 407 S.E.2d 222. The Court in Woodson, emphasized that “intent” is met when an employer “engages in misconduct knowing it is substantially certain to cause serious injury or death to employees.” Id. As such, an employee, or personal representative of the estate in case of death, may pursue a civil action against the employer. Id. For purposes of tort liability, one who intentionally engages in conduct knowing that particular results are substantially certain to follow also intends the results.

For example, a corporation, acting through its agent, that directs an employee to operate in a trench, and considering the nature and physical conditions of the surface and subsurface material, that only consisted of sheer, vertical walls fourteen feet deep, had an exceedingly high probability of failure, and consequently, was substantially certain to fall. Woodson, at 224. Thus, the corporation and its agent were liable for the injuries that resulted from the trench that collapsed because the employer intended to engage in the conduct an its intended results. Id.

In general, in the context of corporations, a corporation and its agent may face liability for the conduct of the employees in the course and scope of the agency relationship under the doctrine of respondeat superior. Mills v. Mills, 52 S.E.2d 915 (1949). However, one who employs an independent contractor is generally not liable for the independent contractor’s negligence unless the employer retains the right to control the manner in which the contractor performs his work. Liability may, however, be imputed to the general contractor if the circumstances fall within the exception to this general rule.

Since construction sites are a mix of contractors and independent contractors (subcontractors), when bringing a personal injury suit for a construction-related injury, liability may potentially be spread through multiple parties, not just a direct employer. The dedicated personal injury attorneys at Rosensteel Fleishman, PLLC are here to help navigate the legal complexities of these claims.

Please contact us at (704) 714-1450.  You will speak with a lawyer who can discuss your rights and options.  There is no fee for an initial consultation.