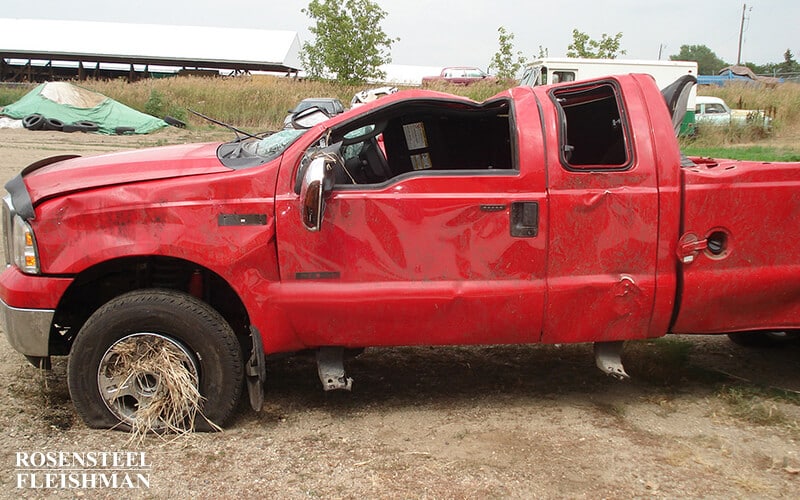 WSOC-TV reports that this morning a Good Samaritan forced a woman to get out of her car stuck on train tracks, just before the train collided with the car and pushed it about a quarter mile down the tracks. The woman had missed her turn onto I-85 in Gastonia and was making a U-turn on a side street where the railroad tracks crossed, when her car became hung up on the tracks. The Good Samaritan heard the train approaching and ran up to the woman’s car. The woman refused to get out because she was worried about her car, but the Good Samaritan forced her before the train collided with the car. The car was pushed down the track before the train was able to stop. Fortunately, the woman escaped unharmed. However, if she had not been so lucky, what would be the negligence analysis of this situation?

There are no facts reported that show the train’s negligence. However, trains have duties and if they fail to meet those duties, they might be found negligent. For example,

[W]here a railroad track crosses, at the same level, a public road or street, the law imposes upon the operator of the railroad the duty to give reasonable and timely warning of the approach of a train to the crossing. Ordinarily, at a grade crossing where no unusually dangerous or hazardous conditions exist, timely signals by sounding the bell or blowing the whistle are deemed adequate. But where there are circumstances of more than ordinary danger and where the surroundings are such as to render the crossing peculiarly and unusually hazardous to those who have a right to traverse it, a question of fact is raised for the determination of the jury whether under the circumstances the operator of the railroad has exercised due care in providing reasonable protection for those who use the crossing, and whether the degree of care which the operator of the railroad is required to exercise to avoid injury at grade crossings imposes the duty to provide safety devices at the crossing.

A railroad is under a duty to exercise reasonable care to maintain its crossings over a public highway in a reasonably safe condition so as to permit safe and convenient passage over them by persons exercising ordinary care in the use thereof. A railroad company is not an insurer of the safety of travelers, and it is not required to maintain a foolproof crossing or a crossing where no injury is possible. In general, a railroad company is only liable for a defect or condition on its right of way over a public crossing which is caused by its negligence and which renders crossing unnecessarily unsafe and dangerous to persons having occasion to use the crossing, while in the exercise of reasonable care; and such negligence is a proximate cause of the injuries complained of.

Motorists also have duties regarding how they act when approaching a railroad crossing. north carolina statute G.S. 20-142.1 states that

(a)    Whenever any person driving a vehicle approaches a railroad grade crossing under any of the circumstances stated in this section, the driver of the vehicle shall stop within 50 feet, but not less than 15 feet from the nearest rail of the railroad and shall not proceed until he can do so safely. These requirements apply when:

(1)    A clearly visible electrical or mechanical signal device gives warning of the immediate approach of a railroad train;

(2)    A crossing gate is lowered or when a human flagman gives or continues to give a signal of the approach or passage of a railroad train;

(3)    A railroad train approaching within approximately 1500 feet of the highway crossing emits a signal audible from that distance, and the railroad train is an immediate hazard because of its speed or nearness to the crossing; or

(4)    An approaching railroad train is plainly visible and is in hazardous proximity to the crossing.

(c)    When stopping as required at a railroad crossing, the driver shall keep as far to the right of the highway as possible and shall not form two lanes of traffic unless the roadway is marked for four or more lanes of traffic.

(e)    An employer who knowingly allows, requires, permits, or otherwise authorizes a driver of a commercial motor vehicle to violate this section shall be guilty of an infraction. Such employer will also be subject to a civil penalty under G.S. 20-37.21.

We might assume that because the woman’s car got stuck on the tracks, the train was not visible or the gates were not lowered at the time she approached the railroad crossing.

However, another statutory requirement is contained in G.S. 20-147, which states that

In crossing an intersection of highways or the intersection of a highway by a railroad right-of-way, the driver of a vehicle shall at all times cause such vehicle to travel on the right half of the highway unless such right side is obstructed or impassable.

This statute might arguably prohibit a person from making a U-turn on railroad tracks, and even if the train was negligent might make the woman contributorily negligent and potentially bar her recovery for damages.

Sometimes a contributorily negligent plaintiff can use the last clear chance doctrine to still recover damages. However, in cases in which a car is stalled on railroad tracks, courts have held that “[t]he engineer ha[s] a right to assume up to the very moment of the collision that the plaintiff [can] and [will] extricate himself from danger.” (Temple v. Hawkins (NC SCt 1941)) In Temple, the train was negligent in failing to give a signal to warn a motorist whose truck had stalled on the tracks. The motorist argued that, notwithstanding his contributory negligence, the he should be able to recover damages under the last clear chance doctrine. However, the Court first reasoned that even if the train had given a signal, this would not have helped the motorist because he had seen the train approaching with enough time to get out of the truck before the collision. The Court then stated that

There is no evidence that the engineer knew, or by the exercise of due care could have known that the plaintiff was helpless upon the track of the defendants, if indeed plaintiff was so helpless. Plaintiff may have been courageous and loyal to the extent of being foolhardy in his effort to save his employer's truck, but the evidence does not tend to show that he was either helpless or oblivious of his danger. Like Casabianca of old he stayed by his ship, alas too long! This may, perhaps, have been praiseworthy, but the consequences thereof are not the liability of the defendants.

If you have been injured in a car accident on train tracks, visit www.rflaw.net for legal help.