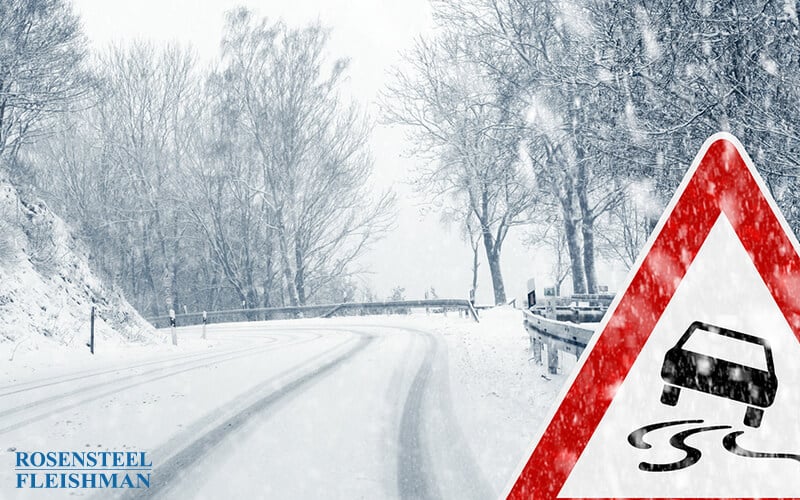 The recent cold snap has led to some recent discussion about a polar vortex this summer. And although there was not actually a summer polar vortex, the talk about it pulled me out of my happy summer frame of mind and got me thinking about last winter’s ice and snow and cold. Ice and snow can make road conditions dangerous and lead to numerous car accidents. So what happens when weather is a factor in a car accident?

Let’s consider the case where a car is travelling on an icy road and skids out, causing the car to cross the center line and hit an oncoming car. This fact scenario is close to the facts in the 2007 north carolina Court of Appeals case, Sobczak v. Vorholt. In Sobczak, the plaintiff was travelling on a two-lane road early in the morning, after a light snow the previous evening. The road was was slippery in spots with sections of black ice. The plaintiff was was travelling around 30-35 mph, although the speed limit was 55 mph, because he felt that it was a safe speed given the weather conditions. The defendant approached the plaintiff on the road from the opposite direction, and during the previous 4 miles of travel on the road, the defendant did not observe icy conditions. At the time of the accident, the defendant estimated that he was travelling around 30-35 mph when his car slid on some ice, fishtailed, crossed the center line, and crashed into the plaintiff’s car. An officer who responded to the accident issued the defendant a citation for “for exceeding a safe speed while driving on ice.”

(d) Whenever any street has been divided into two or more clearly marked lanes for traffic, the following rules in addition to all others consistent herewith shall apply.

(1) A vehicle shall be driven as nearly as practicable entirely within a single lane and shall not be moved from such lane until the driver has first ascertained that such movement can be made with safety.

The defendant violated this section even though his car crossed the center because it skidded out of control. Therefore, the plaintiff “established a prima facie case of negligence in that all of the evidence showed that Defendant crossed over the center line and struck Plaintiff in the opposing lane of traffic.” However, the defendant “could rebut the presumption of negligence created by a violation of section 20-146(d) by presenting evidence that he was on the wrong side of the road from a cause other than his own negligence.”

Even though the defendant claimed that he did not see any icy patches in the previously travelled portion of the road, law enforcement stated that they had observed such icy patches. Furthermore, the defendant did observe snow which he knew could turn to ice when it is packed down. This evidence showed that the defendant “was on notice of a potential encounter with ice on the road, and that hitting ice as he drove was foreseeable.” Therefore, the defendant

Now what about a case where a car rearends the car in front of it when there are white-out conditions from snow? This is similar to the facts in the 1969 court of appeals case, Racine v. Boege. In Racine, the defendant came upon a fog so dense that it reduced visibility to nearly zero. After travelling approximately 1000 feet into the fog, the defendant struck the rear of plaintiff’s car. The plaintiff testified that at the time of the accident he was travelling 20-25 mph, which means that the defendant must have been travelling at a greater speed.

The court of appeals noted that “[o]rdinarily the mere fact of a collision with a vehicle ahead furnishes some evidence that the following motorist was negligent as to speed, was following too closely, or failed to keep a proper lookout.” However, this rule is not absolute and “[w]hether in a particular case there be sufficient evidence of negligence to carry that issue to the jury must still be determined by all of the unique circumstances of each individual case, the evidence of a rear-end collision being but one of those circumstances.” Furthermore, North Carolina G.S. 20-141(a) prohibits a driver from travelling “at a speed greater than is reasonable and prudent under the conditions then existing.” The court concluded that it was possible that the defendant was exercising reasonable care but there was sufficient evidence that the case should have been submitted to the jury.

If you have been involved in a weather-related car accident in North Carolina, call an attorney at Rosensteel Fleishman, PLLC (704) 714-1450, to discuss your options.