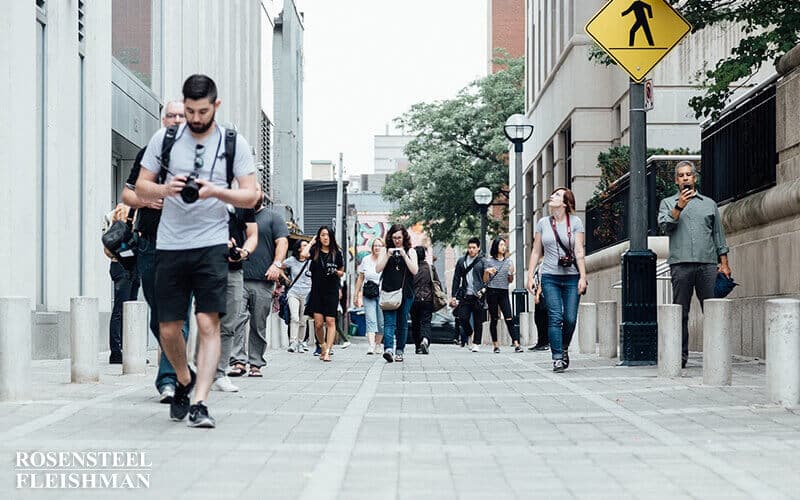 Pedestrian injuries in the state of North Carolina, and specifically in Charlotte have been an increasing problem. Charlotte is especially vulnerable to some of these accidents for a variety of reasons. Charlotte is growing rapidly and with the increased population comes increased risk for those on the roads. north carolina only trails Texas, California, Florida, and Georgia in traffic accidents involving pedestrians.

Whether pedestrians in Charlotte are on electric scooters, bikes or walking there is an unusually high occurrence of pedestrians struck by vehicles. When an accident involving a pedestrian and a vehicle occurs the central question is usually who is at fault. Fault in these cases is typically determined by determining which party either the driver of the vehicle or the pedestrian acted with negligence. In North Carolina law, negligence refers to the careless or willful actions or inaction of the responsible party, which resulted in injuries.

North Carolina negligence laws follow the doctrine of contributory negligence. This would bar the plaintiff from compensation if he or she were even partially at fault. In this type of case that we are looking at it is possible for contributory negligence to be present. If a pedestrian is crossing the street illegally and is struck by a car that is speeding under North Carolina law the pedestrian would not be entitled to collect because they are partially at fault for illegally crossing the street. North Carolina statutes define pedestrian laws along roadways within § 20-174. This statute states:

(a) Every pedestrian crossing a roadway at any point other than within a marked crosswalk or within an unmarked crosswalk at an intersection shall yield the right-of-way to all vehicles upon the roadway.

(c) Between adjacent intersections at which traffic-control signals are in operation pedestrians shall not cross at any place except in a marked crosswalk.

For the plaintiff to show actual cause they must show that there is a factor in the case without which injuries would not have occurred. It is typical in these instances to use the “but-for test.” The plaintiff will ask, but for the defendant’s actions would the injuries have occurred? The plaintiff will also have to show proximate cause. Proximate cause in a pedestrian injury case would involve an accident, which results in a particular injury due to negligence or intentional wrongful act of a driver. A plaintiff must prove that the driver’s conduct was the factual cause and the legal cause of the injuries to the pedestrian.

Proving the damage sustained in an accident is a key element in the case against the at-fault driver. Typically in a case where a pedestrian is struck they would be showing that bodily harm occurred. When bodily harm occurs there are quantifiable damages, such as medical expenses and lost wages. Showing medical bills can prove this, and time missed from work that would not have otherwise been missed but for the injuries sustained. Other damages can also be claimed such as pain and suffering, or emotional distress although those are less quantifiable.

When a plaintiff is able to show that there was a standard of care, the driver violated that standard of care, and that violation was the actual and proximate cause of the injuries then a plaintiff can recover damages in the case of being struck by a vehicle.  To discuss your case please contact us at (704) 714-1450.  You will speak directly with an attorney who can discuss your rights and options.  There is no fee to speak with an attorney.