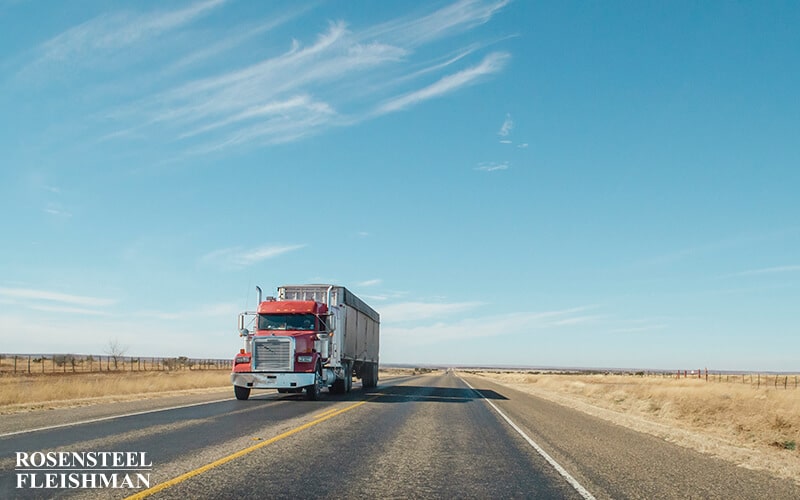 “Owning” Up: Being Sure Safety Stays Rolls With Big Rigs

If you go only by the number of corporations or large LLCs that own big rigs, there does not seem to be much of a problem. After all, big rigs drive literally a total of millions and millions of miles, for a few dozen giant corporations. This leads to the numbers not always adding up, when it comes to big rig accidents. For example, nationally, only 4% of all vehicles in the United States are big rigs or tractor trailers. Digging into those numbers --which is something a Charlotte trucking accident lawyer in turn, often has caused to do --reveals the truth. On Interstate highways, half of all traffic is actually created by big rigs. And in congested areas, like Charlotte or Raleigh, one in four vehicles at any given time is likely to be a big rig.

The problems that can happen to an automobile driver, when hit by a big rig, are often catastrophic. Sadly, the risks of these crashes are often not driven home to the company truly responsible. The truck driver/operator is often left holding the blame. Having an experienced Charlotte trucking accident attorney work for you as soon as possible will hopefully open a broader question: who was actually responsible for the truck, and trucking accident involved.

One Congressional study asked the National Transportation to explain the flood of safety issues, crashes, and lack of accountability for stopping the accidents.

A great deal of the key information developed in Congress, calling for better safety, came from the cases developed by Charlotte trucking accident attorneys. One especially important expert testified based upon his 17 years in North Carolina trucking: “if I could convince the public that truck drivers are forced to be the unwilling participants in all sorts of unsafe practices because our union and the government are in collusion with the trucking companies.”

Of the more than 4 million trucks that were rolling at the time of the congressional investigation, criticism especially centered on the fact that one million of these vehicles weighed up to 80,000 pounds; by special permit, some of these vehicles weighed over 130,000 pounds. This lethal weight, a trucking accident attorney noted, was so commonly recognized as danger on wheels that experts developed what is called a “kill rate” for collisions between big rigs and automobiles.

Knowing terms of trucking art is another reason for hiring only an experienced attorney. There is an interesting and often confusing mix of federal licensing, with a heavy dose of state oversight and enforcement. It makes sense when you think of it. After all, the Interstate (where most of the worst accidents occur) are federally mandated highways, but have state law enforcement and often County assistance.

Certainly, it's not all bad news, accident attorneys have been increasingly successful in dealing with many of these safety risks, and even attempts of corporations to escape fair and legal accountability. But much of this rests upon being sure that an injured citizen in an auto accident gets the help they need, and uses an experienced and qualified trucking accident attorney.

Obtaining records is often a significant challenge and requires a Charlotte accident attorney who understands how these systems work together: and, when the state and federal enforcement seem to be in conflict.

Some of the safety abuses as described in the Congressional study have been fixed. There has been stricter enforcement using technology to require better logs, and making sure drivers get off the road after so many hours. Unfortunately, as an expert Charlotte trucking accident attorney may find in a particular case, some major companies have simply shifted the burden by changing the technical requirements of “ownership.” Placing a burden on a truck operator to lease a vehicle or big rig in order to haul freight may have the effect of shielding the company from liability in the event of an auto accident.

The wrecks do still continue. In one recent year, the number of large trucks involved in fatal crashes increased 10 percent, from 4,251 to 4,657, and the large truck involvement rate went up 6 percent.

The victims in the trucking industry include not only innocent auto drivers and their families, who were vehicles unlucky enough to be caught in the path of a faulty or runaway big rig. The truck drivers themselves now suffer from maladies after a career behind the wheel…no matter who “owns” the safety problems. Fatigue and attempts to deal with it remain one of the largest problems. Many truck drivers report that they can only survive by using some type of pep pill or other drug.

Maladies for truckdrivers range from hearing issues all, caused by defective exhaust: some decibel levels show at over 110 in these cramped cabs. This kind of decibel level, a Charlotte trucking accident attorney can point out, not only contributes to some accidents, but can even affect permanent hearing.  The 110 decibels is more than the sound of a supersonic aircraft at takeoff. The cramped seating in the trucks come along with jolting and bouncing that are common, causing back and kidney disorders... again all contributing to inattention and potential risks to anyone on the road.

Other studies from medical centers reveal how vibrations from high powered truck engines actually cause fluid shifts within a person’s body, and that these chronic conditions often lead to permanent lung damage in drivers. Other drivers still report a type of aggregate career fatigue, which leads to literal hallucination from exhaustion. At its worst, Charlotte trucking accident attorneys estimated that almost 61% of all truckers were using some type of narcotic in order to function behind the wheel.

These myriad conditions of hidden risks on 18-wheels need to be addressed in any significant accident involving a big rig. A specific claim may rest upon showing knowledge by a company as to what it was asking from a driver, and if there were particular risks known to the company. As well, identifying any efforts to dodge ownership or accountability on these issues can only be explored by a Charlotte trucking accident attorney who understands these issues, terms of art, and how they may have been avoided by a specific company.

If you, a family member or a loved one have been hurt in a  big truck or tractor/trailer incident—or have questions about a prior or recent accident—or have questions about insurance claims or need help related to a motor vehicle insurance policy, or involving related claims or your legal rights or hearings, please contact us.  You will speak with a Charlotte trucking accident attorney who can best answer your questions.  There is never a fee for this initial consultation.