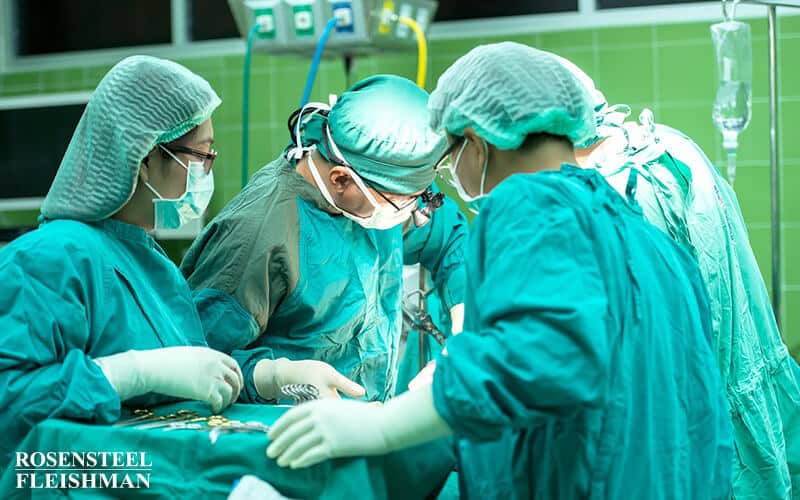 A hospital is where you go to get better, but did you know it is also a hot bed for infections. Hospital Acquired Infections (HAI) are one of the leading causes of patient deaths in the United States.  According to the Centers for Disease Control, 1.7 million patients will get a HAI during a hospital stay this year, and 99,000 of those patients will die.  Typically, hospitals defend these cases on the basis that HAI are a known risk of treatment.

What is a HAI

A HAI is an infection you get in a hospital, or other clinical setting, such as a nursing home or rehabilitation facility. It is unrelated to the reason which brought you to the hospital in the first place.  It’s contracted after your admission or visit to the hospital, and it is caused by viral, bacterial or fungal pathogens which are typically resistant to antibiotics.

The most common pathogens are Staphylococcus aureus (staph infections), Pseudomonas aeruginosa (systemic infections such as urinary tract infections, dermatitis, respiratory system infections, soft tissue infections, bone and joint infections, and gastrointestinal infections), and E. coli (bacteria that lives in the intestines and affects the gastrointestinal system).  Hospitals, and other healthcare facilities, go to great lengths to follow disinfection/sterilization protocols, but HAIs are not 100% preventable.

HAIs are a known and accepted risk of being in a clinical setting. Generally, you cannot sue a hospital because you have contracted an infection, unless it is a result of incompetence or negligence, which happens more often than you think.  Sometimes hospitals cut corners to save money and/or maximize profits, or they are simply too lax about patient care.

Regardless of whether the negligence is a result of an unsanitary environment, or a delay in diagnosing and properly treating the infection, proving the elements of a medical malpractice case in which a HAI results in injury is particularly difficult. As with all medical malpractice cases, you must prove 1) the medical provider owed a duty of care to you—the medical provider’s actions are those in which a reasonable doctor in the same field would have done in the same or similar situation; 2) the duty of care was breached—the doctor deviated from the standard of care; 3) the breach of duty was a direct and proximate cause of your injury; and 4) the damages resulted from the injury.

For example, you present to your local emergency room because you cut your hand.  The doctor comes in to examine you to make sure you are stable (duty), but before he does a comprehensive examination, he touches your hand to get a glimpse of your wound.  Unfortunately, he failed to wash his hands first (breach of duty).  A few days later, you’re back in the ER because your hand is red, swollen, draining, and you have a fever. You’ve contracted a staph infection that has invaded your bloodstream.

To make matters worse, the strain of staph you have is resistant to antibiotics and you’ve become septic.  Sepsis is a life-threatening complication from an infection which can cause multiple organ failure (direct and proximate cause of your injury).  You eventually make a recovery and are discharged home after an extended hospital stay followed by several weeks in a rehabilitation facility.  Furthermore, you have missed 6 months of work, which was taken as unpaid leave, and you now have thousands of dollars in medical bills to pay (damages).

This example may be a bit extreme, but similar situations like this one happen every day.  If it didn’t, 99,000 people would not die from HAIs.

One of the challenging aspects of prosecuting a HAI case is determining the origin of the infection because it is not something usually documented in the medical record; there is no paper trail to determine the source of the infection. In many instances, the hospital may not be responsible for causing a HAI, but it may be culpable for failing to timely diagnose and properly treat a HAI.

Despite the difficult nature of HAI cases, it is not impossible to prevail.

$9.5 Million Settlement in Hospital Infection Lawsuit for Flesh-Eating Bacteria.  “Monica Sprague Jorge, a 41-year-old woman, lost all her limbs and several organs to a flesh-eating bacteria while a patient at Emerson Hospital in Concord, MA. Monica Sprague Jorge contracted necrotizing fasciitis in August 2007, following a routine cesarean section during the birth of her daughter Sofia… [she] had all her limbs amputated and lost her uterus, ovaries, gallbladder and part of her colon to the fast-spreading disease.  Her claim alleges that she contracted the bacteria…due to inadequate post-surgical care… alleges her health care providers failed to review Jorge’s pertinent history, appropriately monitor and report vital signs, appropriately examine Jorge’s wound, and appropriately report the seriousness of the patient’s condition….”

A jury awarded $13.5 million to a Massachusetts woman who died as a result of a flesh-eating bacteria contracted during cancer treatment.

Utah woman reached a confidential settlement in a $16 million suit she filed, alleging that a hospital failed to detect necrotizing fasciitis, before and after she gave birth, which resulted in the amputation of 3 limbs and the loss of several organs.

Missouri couple was awarded $2.58 million after the husband contracted a potentially deadly type of staph infection, known as Methicillin Resistant Staph Aureus (MRSA), when doctors inserted a pacemaker. Because of the infection, the husband lost a kidney and his leg and foot had to be amputated.

If you have contracted a hospital acquired infection, call our office today for a free consultation. Your potential medical malpractice claim should be evaluated and investigated by a medical malpractice attorney with knowledge and experience with HAIs.