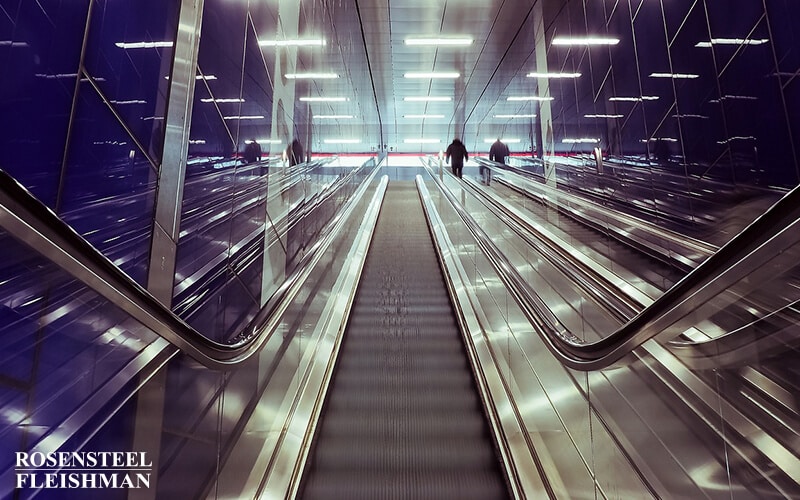 Like many of life’s conveniences we take it for granted that escalators will be in good working order and well maintained.  However, that is not always the case.  A common statistic is that about 10,000 escalator-related injuries per year result in emergency department treatment in the United States.   In fact, when escalators malfunction it can have catastrophic effects on the people using them.   If you’ve been injured on an escalator you have rights. There are multiple avenues to pursue a recovery for your medical bills, pain and suffering and lost wages.

A Nation Institute of Health study of ER admissions in Switzerland since 2000 found that 50% of those injured were woman, the majority were older than 60 years old, and 50% of those injured stayed in the hospital for over 24 hours.  The majority of injuries were to the legs and head.  These findings also correlate to similar findings in the United States.

There are many reasons why an escalator might malfunction.  This article will go over some of the most common issues with escalators. Issues may include jamming, software error, or failure to provide regular maintenance.

Escalators in north carolina are regulated by the NC Department of Labor.  North Carolina inspectors conduct inspections to ensure proper installation, maintenance, and operation of escalators that operate in public establishments and private places of employment.   That means that if you are an owner of a public establishment, like a mall, you must have your escalator plans approved before installation.  The law controlling escalators can be found looking at the Elevator Safety Act, North Carolina General Statute 95-110, herein the “Act”.   The NC Department of Labor has also promulgated administrative rules, which provides further requirements and oversite over escalators.  These administrative rules are substantive in nature and have the effect of a rule of law.

One of the requirements under the Act is the duty to report occurrences within 24 hours to the Department of Labor.  An occurrence is defined in the statute as death or injury requiring medical treatment, other than first aid, by a physician. First aid means the one time treatment or observation of scratches, cuts not requiring stitches, burns, splinters and contusions or a diagnostic procedure, including examination and x-rays, which does not ordinarily require medical treatment even though provided by a physician or other licensed personnel.   Failure for an owner to report an occurrence can result in civil and criminal penalties.

One of the key sections in the Act is section 95-110.8 Operation of unsafe device or equipment.   No person shall operate, permit to be operated or use any device or equipment subject to the provisions of this Article if such person knows or reasonably should know that such operation or use will expose the public to an unsafe condition which is likely to result in personal injury or property damage.  This section, in effect, puts the onus on the owner of the escalator to perform regular maintenance and inspection of the escalator.  Failure to perform regular maintenance exposes to the owner to civil liability if the escalator malfunctions and results in injury to an individual.   As a public policy this makes sense as the public should be allowed to assume the escalator is in good working condition.

There are multiple areas in an escalator where it could fail.  The general structure of an escalator includes the Balustrade (which includes the moving handrail and the skirt guard) the Steps (including the riser and tread) and the comb and step plate.  Failures can occur at any of these areas.  The most common maintenance failures include worn belts, broken safety catches, pulley system breakdowns and loose or missing components.

Sometimes “failures” are built into the system.  For example, if the system detects that something has been jammed in the handrail and prevents the normal operation of the escalator it will shut off.  However, the question arises regarding what is the proper course of action at that point.  Should the escalator go in reverse to try to release whatever is jammed (potentially a body part)?  If the escalator goes in reverse can that cause an individual to fall?  Was enough time and notice provided to individuals to prepare the escalator to go in reverse?  These are questions of fact that jury may have to answer.  The risk of abruptly going in reverse is that individuals who are not prepared or holding on may lose their balance and fall.  In some instances a fall may result in someone falling over the Balustrade (handrails).

We’ve all been at a location where the escalator is turned off.  In some situations the escalator is blocked off and in others they are used as stairs.  The issue is that some escalators work with a counterweight system.  In these systems it doesn’t take much weight to make the steps start moving if the brake is not set or broken.   Any abrupt movement may cause someone to fall, especially if they are expecting the escalator to “behave” like steps.

Power failures can also result in the escalator stopping abruptly.  This can result in an individual failing causing an injury.  In many systems, if the power goes out the brake should immediately engage.  If the brake fails to engage it can cause individuals to slip and fall.

There can be multiple defendants in an escalator case.  Defendants can and often do include the manufacturer, maintenance provider or owner. Many times it is best to bring claims against all 3.  In practice however, there will usually be contractual agreements between these parties regarding liability as well as indemnity and contribution.

As the use of Escalators has spread from malls, shopping centers, airports and beyond, the risk to the public from a malfunction has increased.  North Carolina has laws designed to protect the public.  If you or a loved one was injured on an escalator please call us at (704) 714-1450.  You will speak with a lawyer who can answer your questions and explain your rights.  There is no fee for an initial consultation.