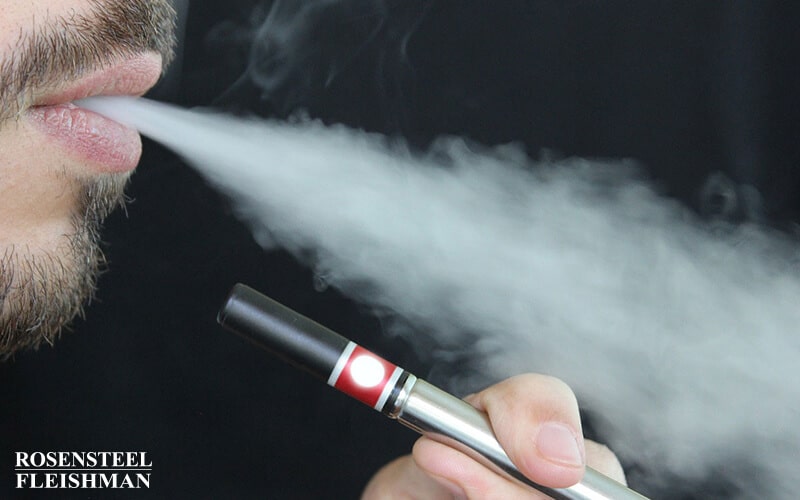 Whether you are at a bar, baseball game, or simply out hanging with family and friends, you have probably seen someone with an e-cigarette. Electronic cigarette (“e-cigarette”) encompasses a whole class of devices such as e-cigs, personal vaporizers (PVs), electronic nicotine delivery systems (ENDS), mods, or similar devices. These e-cigarettes are battery-powered devices which simulate tobacco smoking by producing a heated vapor that resembles smoke. With thousands of flavors available, these devices have become very popular as an alternative to smoking, including a growing number of individuals who have never been smokers.

Aside from the well-known physiological effects of consuming nicotine from e-cigarettes, the most immediate threat of these nicotine-delivery devices comes from the lithium-ion batteries used in the device. Lithium-ion batteries are commonly found in a number of high-tech devices, including smartphones, laptops, tablets, cameras, watches, and hover-boards. Like e-cigarettes, these devices have the potential to explode without warning and cause serious permanent injuries. One particular instance, reported by CBS north carolina, stated that a man in Wilmington lost his eye after an e-cigarette exploded. The sheer force of the explosion has caused people to not only lose an eye, but suffer injuries to their mouth and teeth, and even holes blown through their cheeks. Other related injuries include severe burns, facial fractures, broken necks, and paralysis.

The explosions have been more common in e-cigarettes because of a battery failure process called “thermal runaway.” During thermal runaway, internal defects such as dust, contaminants, moisture, and other poor design defects, cause short circuits and result in raising temperatures enough to spur reactions to release more heat. The lithium-ion battery is particularly suitable for e-cigarettes because they are rechargeable and contain high levels of energy density and voltage.  As a result, when a heating element is added to produce the vapor, the increase risk of thermal runaway follows.

According to the National Fire Data Center of the U.S. Fire Administration, over 195 separate e-cigarette fire and explosion incidents have been reported from 2009 to 2016. Sixty-eight percent (68%) of these incidents involved 133 acute injuries, some of which included in-pocket explosions, while others include explosions when the device was in use, and some when the battery was being charged. In 2013, a jury awarded a woman in Southern California $1.9 million for second-degree burns she received from an e-cigarette explosion. The explosion came unexpectedly while she was charging her e-cigarette in the USB port in her car. While the media often characterizes the incidents as explosions, the events tend to occur suddenly, and are accompanied by loud noise, a flash of light, smoke, flames, and often a vigorous ejection of the battery and other parts. A number of reports state that the battery and other components eject and ignite combustible items where they land. Because the e-cigarette contains a limited amount of combustible material, fires are usually a result of the burning battery and/or e-cigarette coming in contact with material that is easily ignited, such as bedding or clothing.

E-cigarettes are supposed to be a safer alternative to smoking traditional cigarettes, however, the use of lithium-ion batteries in these devices have presented a new and unique hazard to consumers. Persons that have been injured by e-cigarette related explosions deserve full and fair compensation for the personal injuries they suffered. There is a legal obligation for manufacturers and distributors to protect consumers from unreasonable dangers. If a manufacturer or distributor fails to satisfy their duty to sell a reasonably safe product, you may be entitled to bring a products liability claim for injuries they may have resulted. This type of products liability claim can come in different forms: design defects, manufacturing defects, and/or failure to warn.

States and the federal government have been actively moving to regulate e-cigarettes.  These regulations can be valuable resources in a civil claim again e-cigarettes manufactures and sellers.  In many situations the e-cigarettes manufacture may attempt to blame the manufacture of the lithium-ion batteries.  As such, it is best practices to bring a cause of action against all known defendants.  Failure to do so allows the defense to point to the “empty chair.”

In 2016 the Food and Drug Administration declared authority to oversee e-cigarettes in 2016.  Their regulations went into effect August 8, 2016. These regulations cover those intending to manufacture, import, package, label, advertise, promote, sell and distribute Electronic Nicotine Delivery Systems (ENDS).  Failure to follow the regulations as set forth by the FDA could result in civil liability.

The FDA regulations also restrict the sale of e-cigarettes to customers age 18 and older.  They also require the reporting of detailed ingredients, provide tobacco health documentation, posting warning statements on packaging and advertisements that state potential risks, among other rules.

In October 2015 the U.S. Department of Transportation banned e-cigarettes from checked bags to protect against in-flight fires.

In October 2014, U.S. Federal Emergency Management Agency (FEMA) released the report Electronic Cigarette Fires & Explosions that stated “the shape and construction of e-cigarettes can make them more likely than other products with lithium-ion batteries to behave like ‘flaming rockets’ when a battery fails.”

The injuries reported from e-cigarette use have been catastrophic and can result in lifelong care.

If you or a loved one have suffered any type of injury as a result of using e-cigarettes, contact the experienced attorneys at Rosensteel Fleishman, PLLC to review your case. The dedicated team of attorneys at Rosensteel Fleishman, PLLC will evaluate your case and assist you in recovering compensation for medical bills, pain and suffering, loss of future earnings, and related damages.  There is no fee for the initial consultation.  Please call us at (704) 714-1450.