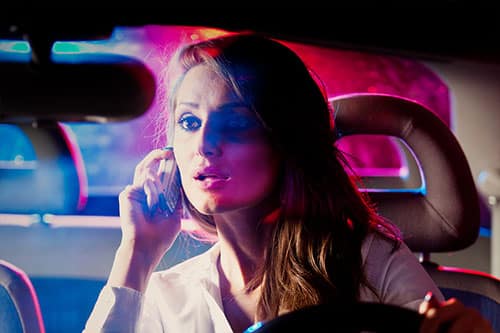 Driving is an important part of our society. The majority of Americans own at least one car, or rely on other forms of transportation, to go to work and carry out their everyday activities. Unfortunately with an increase in driving, there has been an increase in car accidents.

The National Safety Council estimates that in 2020, 42,060 people died in car accidents across the United States. Despite the pandemic and stay at home orders being issued for much of the country in 2020, that number represents an 8% increase from 2019.

Distracted driving happens when something takes a driver’s attention away from the road. Distracted driving can happen as a result of things happening in the car or outside of the car. Distractions in the car can occur when people are eating, changing the radio station, are upset and thinking about something that is not driving, or are distracted by what other passengers in the car are doing. Distracted driving can also occur when our attention is drawn to something outside of the car which results in our taking our eyes off the road, even for a split second. Watching activity on the side of the road or even reading electronic traffic signs or billboards can be distracting. Distracted driving has increased dramatically across the country largely due to the increased use of smartphones. Not only are people talking on the phone, but they are now texting. It takes only a few seconds for something unexpected to happen if you are looking down at your phone.

Legislators and courts across the country have attempted to limit distracted driving due to cell phone use by passing, and enforcing, a number of laws. Currently, approximately 25 states and Washington, D.C. have cell phone laws. Georgia, Tennessee and Virginia are among the states that ban the use of hand-held phones. Drivers are permitted to use cell phones only if they are “hands free,” meaning that they can only talk and listen to the phone while using hands free technology such as the car speakers or through a headset. Even this can be distracting. If you are using a headset and have the volume too loud, you may not hear an emergency vehicle approaching.

North Carolina is a primary enforcement state which means that if a police officer sees you doing any of the above, he/she can pull you over. Drivers caught emailing or texting in violation of the law can receive a fine of $100. Drivers under the age of 18 caught using a cell phone can receive a fine of $25. School bus drivers caught using a cell phone while driving a bus can be fined $100.

What Damages are Available?

If you are injured in a car accident where the driver was distracted, what can you recover? Damages include:

Can You Still Recover Damages if You Were Distracted While Driving?

North Carolina is a contributory negligence state. That means that, in most cases, if you are injured in a car accident but are partially at fault for that car accident, you will not be able to recover damages. Using a cell phone while driving could lead to a finding that you were distracted which could lead to a finding of partial fault; you might not be able to recover damages.

Distracted driving cases are fact intensive, it can be difficult to show that a driver was distracted and that it caused an accident. The Charlotte, NC based lawyers at Rosensteel Fleishman, PLLC are experienced car accident attorneys who can help you understand your rights and whether or not you have damages and should proceed with a claim. Please contact our office at 704-714-1450. There is no fee for an initial consultation.